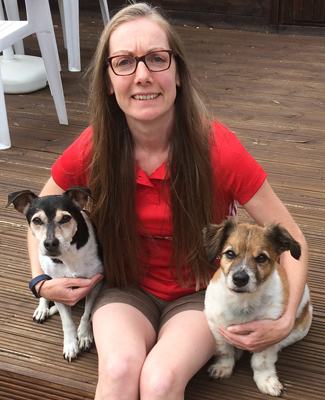 I was recently asked by Mikaela Rice, the Social Lead for Shesays if I would would like to be interviewed for their #CreativeBitches series (Woof Woof), an interview series in which they discuss the impact of dogs on our careers.

Having two dogs myself, who have had an impact on my life and being a #CreativeBitches, I thought why not!

As well as answering some questions I had to supply a picture of myself and my boys (insert obligatory pic!)

Below are the questions and answers.

Tell us about you (your role) and your dog(s) (name, age, nickname?)

My name is Lorraine Wood, I’m a freelance graphic designer running my own company; Penement Design. I specialise in branding and website design. When I’m not sat at my desk I can usually be found on a hockey pitch, captaining Hornsea Ladies Hockey Club.

I have two 11-year-old Jack Russell brothers; Baxter (aka: Baxt or B) and Lewis (aka: Lewy)

How long have you had your dog(s)?

Since eight weeks old! Went for one and the lady told us that there was only the two of them left – not sure if she was fibbing or not but there was no way I was leaving one on his own so we came home with both of them!

What’s their impact on your life and then your work life?

Would be lost without them, although some days they can be terrors, especially Lewis!

Whenever I’m having a stressful time they seem to have this calming effect, taking them out for a walk helps me get out of the office and breath in some fresh air and think about things a little clearer and even inspires some creativity!

Baxter never leaves my side so it’s like having my own security guard following me around and he’s also hot water bottle in the Winter as he has to be sat on my knee.

They’re great listeners, whether I’m bitching about a problem or just trying to talk through a project.

Do you bring your dog to work? Why?

I work from home so they are with me everyday. Lewis likes to let me know when the posty is walking up the path! The office wouldn’t be the same without them lying under the desk, usually on top of my feet.

They’re great timekeepers, always ready to remind me when it’s time to eat, walk and pee! – Which is always useful when you’re working away and lose all track of space and time.

Do you think dogs could have a positive impact on people’s careers? How?

Without question – YES! I don’t know anyone who has a dog that thinks their lives would be better off without them. The people you meet when you’re out walking and the icebreakers it makes when you say you have a dog are great, especially when you have a cutie pie like Baxter!

If your dog(s) were a celebrity, who would they be?

Baxter technically is a celebrity – my brother named him after the dog, Baxter Burgundy, in the film Anchorman –, and yes he does speak Spanish!

Lewis – think he’s an Indian Jones character as he like to go on adventures!

You can find my answers and others on the Shesays Instagram page.